There has been plenty of life through the doors of the McNulty House in Old Cromwell. And there will be plenty more over the next 100 years thanks to a massive restoration project by the Cromwell Breen team.

The land has ties to a former prime minister’s ancestors, pioneering trucking company McNulty Transport used it as their depot at one stage, and it was also a doctor’s surgery and maternity home.

You wouldn’t know it just looking at the building walking past, but the historic building has just undergone a $750,000 restoration, that took place so seamlessly it's hard to distinguish between the old and the new detail that has been added to mimic the 1800s when it was built.

The chimneys are all brand new - pre-fabricated in Dunedin including the copper pots, while the refurbished copper doorstep, brass door handles and wallpaper inside have also been added to recreate the appropriate time period. The stone posts on the gates, handcrafted by stonemason Keith Hinds were up-cycled from the original chimneys (removed because of the earthquake risk), and engineer Brett Sherriff repaired the heritage wrought iron gates. An Old Cromwell Inc project, board member Bernie Scoles even hand-made the intricate door panelling to match the ‘old world’ look.

“There was a lot of time and patience that went into building the original design of its time,” Breen Project Manager Phil Cheney said.

Phil’s been involved with similar scale heritage restorations in his home country Zimbabwe and he understood the New Zealand heritage building had to be restored within strict guidelines.

Breen Construction has a wealth of experience in restoration projects, and in particular the Old Cromwell precinct over the past few 15 years.

In 2015 Old Cromwell Inc had a Conservation Plan commissioned by Jackie Gillies and Associates (now Origin Consultants) in Arrowtown. The company, now owned by Robin Miller, specialises in understanding the history and restoration of heritage buildings throughout Otago.

“Buildings like these are a real pleasure to work on, to find out all about them and how you can breathe new life into them for the public to enjoy,” Robin said.

The importance of the Conservation Plan was to learn about the building and the site before any work was done, and to identify what was significant and the heritage values, he said.

Original stories circulating had the McNulty House built by former Prime Minister Helen Clark’s great-great-great grandfather, but the report actually found that he only owned the land. Her ancestor John Marsh was Mayor of Cromwell from 1883-1885 and the house is understood to be built for his successor Thomas Rooney (Mayor from 1895-1897), by stonemason Wiliam Gair.

A similar style house in Sligo Street was also built by Gair, and because it retained many of its historic internal features, such as doors and fireplaces, it was considered a very useful guide to reinstate the lost features of the McNulty House.

There were several owners of the house before the McNulty family purchased it in 1935 (Margaret Guffie McNulty) including the Mackenzie family. Old Cromwell Inc’s interest in the house dates back to 2005 when the board approached Frank McNulty to ask for first option as a purchaser - should he sell it.

In 2013 a ‘Deed of Lease’ was made with Old Cromwell Inc, with conditions that the building only be used for the purpose of the operation of a historic precinct and related activities - such as art and craft displays, and attracting visitors to a living museum. November 2017 a resource consent was made to change its use from residential to a public display/museum and visitor centre as a discretionary activity.

The board’s objective was to restore the house and future proof it for at least another 100 years. Earthquake strengthening was top of the list. Phil said the earthquake strengthening was a significant job involving 33 reinforced rods drilled through into the stone walls and foundations. Then they were filled with hydraulic lime grout and a ceiling diaphragm inserted into the roof to secure the entire building. “So if it moves (like in an earthquake), it moves as one,” he explained.

The back of the building - an extension once used as a doctor’s waiting room, made of plaster - (cracked and leaking), was demolished along with the unsafe chimneys, and a new construction added, with maximum thermal insulation and full disability access. The old stone fireplaces inside the house were pulled out and replaced with an innovative solution thanks to Aotea Electric.

Duct work has been installed where the flue would have been to allow for Air Conditioned heating and cooling to enter the room via a grille installed in the fireplaces, and a ceiling in the large front room.

But the project wasn’t without its challenges.   When the Breen builders uplifted the floor boards around the perimeter of the building internally to check on the foundation, they found the timber joists supporting the floorboards underneath were completely rotten. A decision was made to remove the existing timber floor structure entirely, pour a reinforced concrete slab in its place, and replace the flooring on top to make the building structure more secure.

“Because it’s such a fragile building - and the foundation was stone….” Phil said.

The house will be officially opening in late March 2021, and Old Cromwell project lead Jessie Sutherland said they have already taken bookings from community groups wanting to use the space.

“We’re hoping the house will become a public building for community events, private events such as weddings as well as used for artisan displays that are compatible with the precinct.” 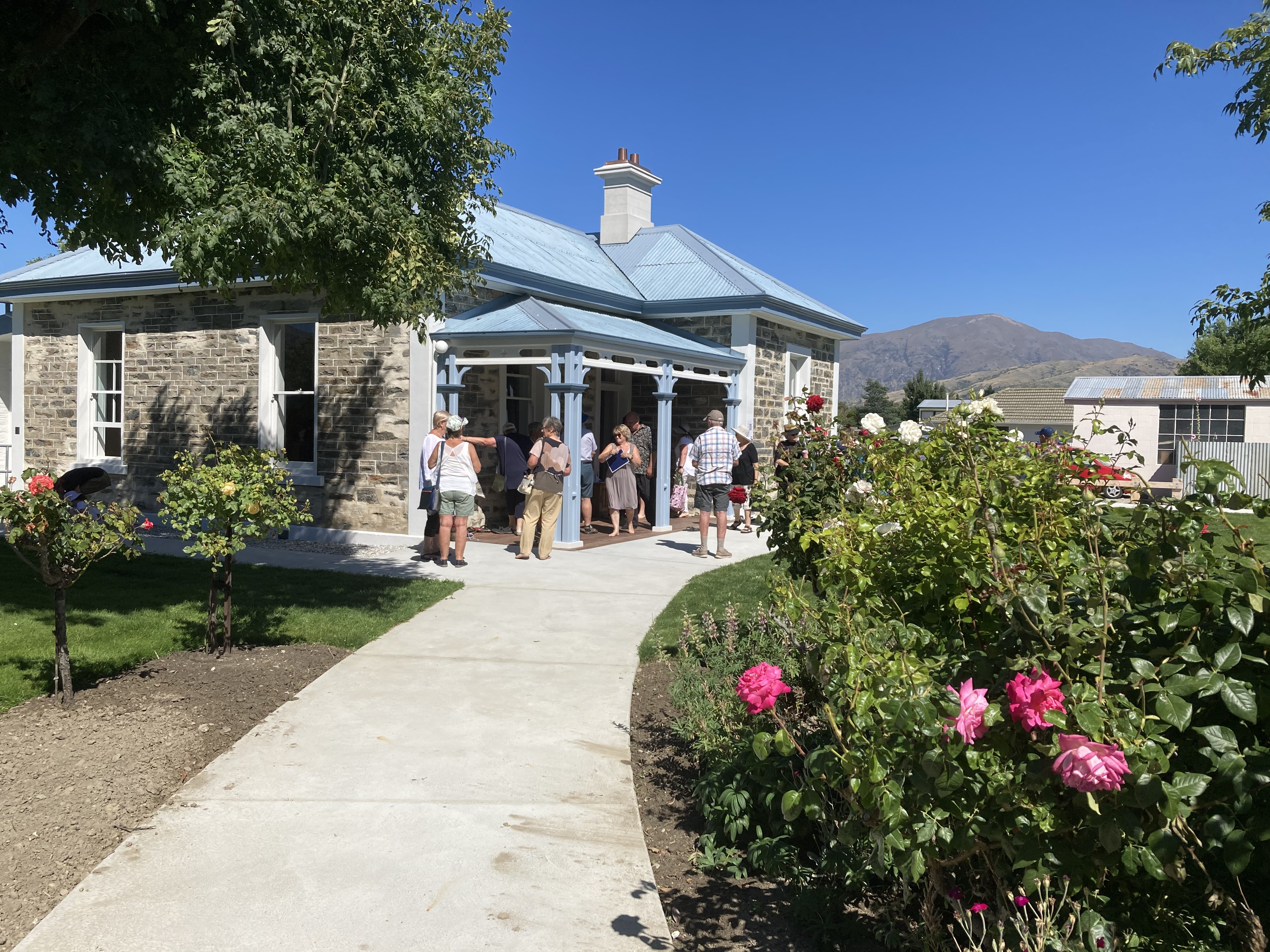 People can’t quite believe what they are walking into when they use the new facilities at Highlands in Cromwell.